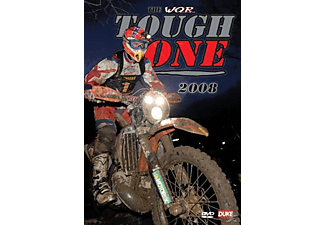 The supreme challenge of the WOR Tough One attracts competitors from Enduro, Trials and other off-road disciplines. Join the all-star line up for the most extreme contest in this comprehensive review of the 2008 Tough One. Nantmawr Quarry in Shropshire was the venue for one of dirt bike racing's truly great events. Huge climbs, terrifying downhill sections, slippery logs, treacherous rocks, and more of the toughest terrain around put the skills and bravery of the best riders in the world to the ultimate test. Enduro King David Knight was back, aiming for a fourth Tough One Extreme Sprint Scramble title in a row. But the Manxman would be challenged by teammate Taddy Blazusiak in a KTM grudge match, as well as taking on a strong field of hard-charging riders, including two-times Dakar Rally winner Cyril Despres, British Enduro Champions Tom Sagar and Wayne Braybrook and many more. This review is packed with action from the two-hour main event, including the heroics of trials star Michael Brown and the drama of Knighter versus Blazusiak . On-board cameras take you even closer to this extreme challenge, including some shocking falls. There's also comprehensive coverage of the UK Speed Trial as reigning champion Steve Colley tries to defend his title against Brown, Graham Jarvis, Juan Knight and other leading riders. Awesome footage, including plenty courtesy of Colley's helmet-mounted camera, puts you at the heart of a determined battle for victory. Plus, don't miss the amazing Clubman race, where 2007 winner Paul Sagar battled with the likes of Kevin Harris, Thomas Hick and Joe Deakin on this spirit-breaking course for 90 of the toughest minutes of their lives! Bonus feature: A complete lap of the WOR Tough One 2008 course from Juan Knight's helmet-mounted camera.