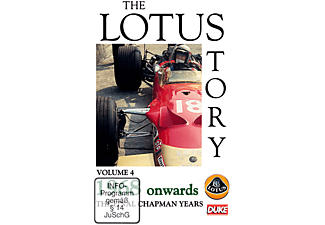 Colin Chapman's Team Lotus were the technological front-runners of the Seventies and Lotus enjoyed many more GP successes with racnig legends Rindt, Fitipaldi, Peterson, Ickx and Andretti. Volume Four in the Lotus Story details the development of the Type 72 the most successful GP car of all time until 1986 (when McLaren's TAG Turbo MP4/2 took over its record), the lighter and stronger John Player Special 9, the aerodynamic Lotus 78, which showed the way ahead in producing a true 'grounds-effect' car and the 'Black Beauty' Lotus 79, a genuine classic whose innovative technology building upon that of the Lotus 78 totally redirected the course of all racing car design. Rindt was the 1970 world Champion, Fittipaldi 1972 Champion and Andretti lifted the crown in 1978 for Lotus and these successes brought the team a further three Constructors Championships. After this success in the Seventies, a downwards trend followed which Senna, Mansell and other could not reverse. Then, after the death of Chapman, Lotus passed through several hands but was never again to achieve the same success. Chamman's people continued with the company, manufacturing Lotus cars and today the company appears to have a secure future although their return to GP racing remains to be seen. Ultimately the legacy that Chapman's Team Lotus left F1 racing was the technological development and inventiveness that redirected the course of race car design which continues in F1 today. Motoring historian Neville Hay recounts these momentous events. Together with superb archive race action, fascinating detail and revealing personal interviews the final Chapman years unfold. This DVD also features an exclusive interview with Chapman's son Clive, where he discusses Classic Team Lotus and his restoration projects that will commemorate an incredible part of racing history forever.