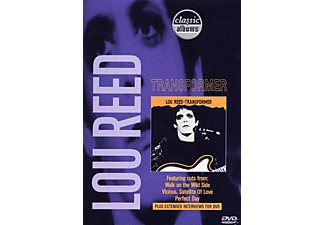 Lou Reed with the help of Andy Warhol at the "Factory", made The Velvet Underground a massively influential band. However it was "Transformer", Lou Reed's second solo album, which took him from cult hero of The Velvet Underground to international superstar status. The programme takes a track-by-track look at the album, which was produced by David Bowie and Mick Ronson. In an exclusive interview in New York, Lou Reed talks of the makin of the album and together with Ken scott, the original engineer, takes us through the multi-track tapes of "Perfect Day", "Vicious", "Satellite Of Love" and "Walk On The Wild Side" amongst others. In London Herbie Flowers shows us how the bass line on "Walk On The Wild Side" was recorded, creating what is one of the most famous riffs in popular music. Dave Stewart of the Eurythmics talks of Lou Reed's influence on him as a songwriter and musician. The programme is illustrated throughout with archive footage of Lou Reed in concert, The Velvet Underground, Andy Warhol and the "Factory" and features exclusive new acoustic material from Lou. This programme provides a unique insight into the process behind the recording of Transformer, which perfectly captured the spirit of the early 1970's, and illustrates why today it is still considered a truly Classic Album.